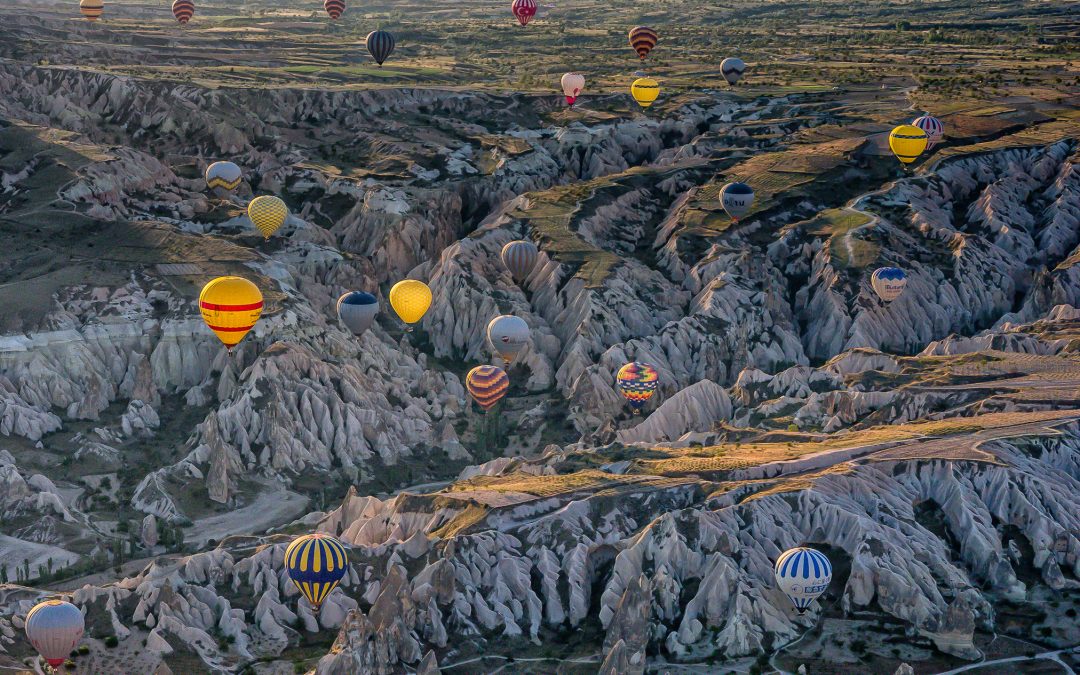 Cappadocia seen from a sunrise Hot Air Balloon ride is a site to behold. We took our just as the sun was creeping above the horizon, along with 50 other balloons. The sunrise, the landscape and to sea of balloons offered a magnificent view.

Cappadocia lies in eastern Anatolia, in the center of what is now Turkey. The relief consists of a high plateau over 1000 m in altitude that is pierced by volcanic peaks, with Mount Erciyes (ancient Argaeus) near Kayseri (ancient Caesarea) being the tallest at 3916 m. The boundaries of historical Cappadocia are vague, particularly towards the west. To the south, the Taurus Mountains form the boundary with Cilicia and separate Cappadocia from the Mediterranean Sea. To the west, Cappadocia is bounded by the historical regions of Lycaonia to the southwest, and Galatia to the northwest. The Black Sea coastal ranges separate Cappadocia from Pontus and the Black Sea, while to the east Cappadocia is bounded by the upper Euphrates, before that river bends to the southeast to flow into Mesopotamia, and the Armenian Highland.[1] This results in an area approximately 400 km (250 mi) east–west and 250 km (160 mi) north–south. Due to its inland location and high altitude, Cappadocia has a markedly continental climate, with hot dry summers and cold snowy winters.[4] Rainfall is sparse and the region is largely semi-arid.  Ref: http://en.wikipedia.org/wiki/Cappadocia